Translating Coach Speak Into Something You Can Use 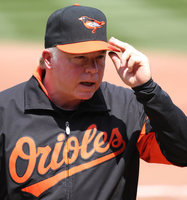 Although most baseball coaches are interested in helping their young players become better hitters and often are pretty good at doing that, they aren't necessarily the best communicators in the world. Some of the terminology they use may make perfect sense to them but is quite confusing to young hitters.

A couple of years ago, JK Whited wrote a fantastic piece for BaseballRebellion.com, titled, Hitters and Coaches: Make sure your Coaching Cues are Set up for Success! In it, JK discusses some of the common jargon that coaches use, what it really is supposed to mean and how players need to interpret it.

As JK points out, sometimes coaches need to reword these commonly used phrases so that they make more sense and don't do more harm than good. He also points out a few that are just plain wrong!

Of course, many coaches have some pretty big egos, so getting them to change their ways isn't likely. Instead, JK suggests that players learn how to translate that jargon into something useful.

He points out 5 very common expressions that coaches use and provides several videos to illustrate the points he makes in the article, as well:

These are not exactly JK's explanations and solutions; they are mine. JK breaks things down into much more detail, provides examples (and videos) of why the expressions are bad when taken literally and offers several different other ways to express what you really want players to do. If you missed the link earlier, here's the link to the original JK Whited Baseball Rebellion article.

If you're a player and hear your coach using these expressions, don't try to correct your coach (believe me, they won't like that). Just know what it is he is really trying to say and make the adjustment.

Pitching Machine Stop Quote of the Day:"My theory of hitting was just to watch the ball as it came in and hit it." - Tommy Lasorda