How to Throw a Changeup 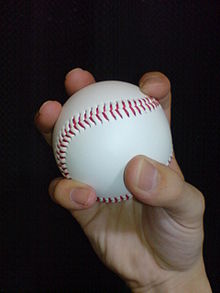 Ask any big league pitcher, and he'll tell you that the real difference between a great pitcher and an average one is rarely how fast they can throw or how much action they have on their breaking pitches. The ability to locate pitches and vary their speeds is what truly separates pitchers.

This week, I'm breaking out a video I saw posted about a year ago that features major league pitcher, Tim Collins. Tim was originally signed by the Toronto Blue Jays organization in 2007, spent a few years in the minor leagues and ultimately ended up being traded to the Kansas City Royals, where he made his Major League debut in 2011.

A career relief pitcher, Collins set the Royals single season strikeout record for a left handed reliever in 2012 and was second in the majors in that same category that year with 93 strikeouts. Although he is known for his curveball, Tim has had tremendous success getting batters to swing and miss when he throws the changeup (a 51% whiff rate).

In the video, Tim shows pitchers how to throw two different kinds of changeups - the "Palm Ball" and the "Circle Change." He not only shows you how to grip the ball, but discusses the follow through and one of the most important things - arm speed. If you don't have the same arm speed with your changeup that you have with your fastball, batters will know it's coming!

If you are a young pitcher, you'll definitely want to watch this video. Practice what Tim teaches and learn how to spot your pitches and you'll have batters on their heels, never knowing what to expect. If you, too, can get batters to swing and miss at half of your changeups, it'll make your fastball that much more effective!