Baseball Positions - Which One is the Best? 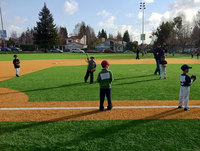 As spring draws near and parents are beginning to enroll their children in Little League baseball for the first time, what better time to start thinking about what position they might play?

When your little one is brand new to baseball, there is a lot to learn. How to hit, how to throw, how to catch and, of course, the many different rules of the game are just some of the important things they must master. If he is a fan of the game, he has undoubtedly chosen a big league hero to emulate and has dreamed of playing the same position.

A coach has tough decisions to make, though, and can't always place players in the positions they want to play. He has to assess the skills of an entire team and figure out which position is the best match for each individual player's skill set. If a youngster is better at fielding grounders than he is at tracking a fly ball, it's pretty clear that one of the infield positions is going to be best for that player and the team, for instance.

Many dreams of emulating their heroes are crushed when first time ball players discover that they won't be playing the same position as their idols. This is when coaches and parents need to step in and emphasize how essential each player is to the team and that every single position is important.

Not only is each position important, but it can be argued that each one of them is the best position to play. David J. Weller did just that last year in a series of articles he published on the Youth Baseball Blog that explained why each position on the field is the best. Here's a brief summary of all of them:

Catcher is the Best Baseball Position

In Baseball Positions: Catcher Is the Best, David Weller says that the catcher is the best position to play. He is involved with every single pitch and is responsible for knowing opposing batters' as well as his pitcher's strengths and weaknesses and using that to his advantage to tell the pitcher what to throw.

The catcher is the field general, telling fielders what bases to throw to and making sure players are in the right positions for cutoff throws. He blocks bad pitches, has a cannon for an arm that he uses to throw out would-be base stealers and is usually the toughest guy on the field.

If your child is chosen to be the catcher, he is a leader and may make a very good good coach or manager someday. He joins baseball icons like Johnny Bench, Gary Carter, Yogi Berra and Carlton Fisk

First Base is the Best Baseball Position

In Baseball Positions: First Baseman Is the Best, Weller says that first base is the best position to play in baseball. Other than the pitcher and catcher, nobody is involved more on defense.

Virtually every ground ball ends up being thrown to the first baseman so he has to be great at fielding throws and scooping errant ones out of the dirt. He keeps runners from stealing second by always being ready for a pickoff throw and is the cutoff man for all throws to the plate from right field.

An ideal position for lefties, if your child is chosen to play first base, he joins some of baseball's all time greats like Lou Gehrig, Don Mattingly, Albert Pujols, and Keth Hernandez.

Second Base is the Best Baseball Position

In Baseball Positions: Second Baseman Is the Best, David argues that second base is the best position to play. A second baseman has to have very quick hands and a great glove. Nobody is in charge of covering more ground in the infield than the second baseman so quick feet and great range are essential.

The second baseman is responsible for all throws to second base from the left side of the field and for covering the base on steal attempts. His very quick hands make it possible for him to turn a double play whether he is transferring the ball from his glove to the shortstop to make the turn or he is the middleman, firing a throw to first base practically as fast as he receives the ball from another infielder.

If you play second base, you are the cutoff man for all throws from right field and many throws from center. Being able to pivot quickly and make an accurate throw is a skill that few people have and one that makes a second baseman special.

Any child who is chosen to play second base joins a list anyone would be proud to be part of that includes Jackie Robinson, Joe Morgan, Rogers Hornsby and Ryne Sandberg.

Third Base is the Best Baseball Position:

In Baseball Positions: Third Baseman Is the Best, David Weller makes the case that there is no better position to play than third base. Because no other position player is closer to the batter, a third baseman must have catlike reflexes, a strong arm and not be afraid of a hard hit ball.

Most young hitters are right handed and the good ones pull the ball. Because of that, the third baseman must be ready for a hot shot down the line on every swing. He can't back up, though, since he has to be ready to charge to the plate on any bunted ball. A third baseman who can get to a bunt quickly and fire a rocket to first base takes a very important strategic play away from the other team.

The anchor of the left side of the field, third base is a position that can only be played by right handers. If your child is chosen to play third base, it means that he is fearless. He joins some of the best fielders and hitters to play the game like Mike Schmidt, Brooks Robinson, George Brett and Wade Boggs.

Shortstop is the Best Baseball Position

The shortstop has to have a very strong arm since he is the furthest away from first base of any of the infielders. He has to have great range, too, since he covers ? of the left side of the infield. He has to cover second base on steals as well as plays at second base and absolutely must have quick hands to turn a double play. The cutoff man for hits to left field and left-center, a shortstop has to be able to pivot and fire a rocket to home, too!

Few players are in a position where more spectacular plays are required. A shortstop has to be able to make plays to his right and left, often diving, and throw from some very awkward positions. Seldom is there a game where the shortstop doesn't have the dirtiest uniform on the field.

In Baseball Positions: Right Fielder Is The Best, David says that right field is the position all Little Leaguers should want to play. Although some may see it as a place to put the weakest fielder on the team, that simply is not the case. A right fielder is the man responsible for keeping runners from advancing extra bases in several situations.

Not only does a right fielder need to have the one of the strongest arms on the field in order to gun runners down at home or third base, but no position has more responsibility when it comes to backing up other players. The right fielder backs up throws made to first by the pitcher as well as all throws from the left side of the infield to second base.

In the Major Leagues, the right fielder is usually one of the best power hitters on the team. If your little one is chosen to play right field, he will be playing the position that some of the biggest names in baseball played. Babe Ruth, Hank Aaron, Roberto Clemente, Frank Robinson and Reggie Jackson are just some of the legendary greats who played right field.

In Baseball Positions: Center Fielder Is The Best, David J. Weller points out that center field might be the best position to play. Captain of the outfielders, no player on the field has to be faster or cover more ground. His incredible speed is evidenced on the base paths, too, where he frequently leads the team in stolen bases.

Not only is the center fielder responsible for covering the deepest part of the ball field, but he has to be fast enough to back up both the left and right fielders and get to balls in the gap on both sides. A strong arm is a must; nobody has a longer throw to home plate than a center fielder does.

If center field is where your child will be playing, he will joining some truly huge names in baseball. Willie Mays, Ty Cobb, Joe DiMaggio, Mickey Mantle and Ken Griffey Jr. are some of the Hall of Famers who played center field.

What About the Pitcher and Left Fielder?

Conspicuously missing from the series of articles by David J. Weller are the positions of pitcher and left field. Now, one could easily argue that the pitcher is the last person on the field who needs an ego boost. Besides, a little league pitcher also plays another position on non-pitching days that is probably covered, above.

That is, unless he is chosen to play left field. Where is the left fielder in David's series of articles? Surely he is at least as important as the right fielder. Apparently he was forgotten. I guess I'll fill in for David here ...

Because there are so many more right handed batters on Little League teams that hit with power, playing left field means you are going to need to be able to run very fast both backward and forward. Line drives will just clear the infield so the ability to field balls off the ground while on the run is just as important as being able to track down fly balls.

The left fielder also needs to be ready to get on his horse and make some pretty spectacular over the shoulder grabs. And, like all outfielders, a left fielder definitely needs to have a good arm. Frequently, he is fielding some of the deepest fly balls, so being able to gun an advancing runner down at second or third and the ability to throw a rope to the cutoff man are things that only someone with a great arm can do.

Every Baseball Position is Important!

As you can see, no matter what position a child ultimately plays, that position is vital to the team. Being able to convey how proud they should be that they were chosen to play such an important position will go a long way toward developing a child's self esteem and their enjoyment of the game.

Although they probably won't join the list of all time greats at their position, they'll undoubtedly become better players when they are shown who the elite pros were at that position and they pick a new hero to try and emulate.

Pitching Machine Stop Quote of the Day:"Baseball is a lot like life. It's a day-to-day existence, full of ups and downs. You make the most of your opportunities in baseball as you do in life." - Ernie Harwell