The Right Hitting Drill Can Make A Huge Difference! 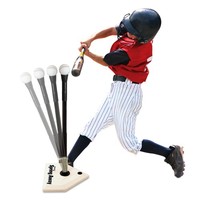 Today, I'd like to highlight an article I discovered a year ago on probaseballinsider.com. The piece, titled, "The Importance of Baseball Hitting Drills," was written by Doug Bernier - former Colorado Rockies second baseman and current player in the Yankees farm system.

The thing that some people will find surprising in the article is that Doug recommends using a batting tee for drills to truly work out the kinks in your swing. Once you've got your swing back in the right groove, you can move to a pitching machine and then a live arm.

Doug mentions a drill that he found particularly helpful with a problem he was recently having - the "high tree drill" - and recommends a book full of drills in the article, as well.

When major leaguers take the time to write about the things young players should be doing to improve their games, you should listen. If you are having problems hitting, this is especially true when that player is Doug Bernier.

Although Bernier ultimately was optioned back to the minors, he is known as quite the hitter. The Yankees signed him this season and he was with the team throughout spring training, where he batted .361 against the big boys. Although he was ultimately assigned to the AAA Empire State Yankees club, don't be surprised if he is called up to the big dance if the Bronx Bombers are in need of a dependable stick!

Pitching Machine Stop Quote of the Day:"Hitting is an art, but not an exact science." - Rod Carew