Should Baseball Be In The Olympics? 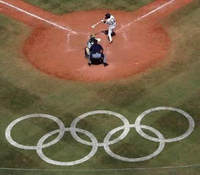 An interview posted last year on the BostonHerald.com website with a former Yankees manager begins by saying that Joe Torre thinks that baseball should be back in the Olympics.

Torre, now a Major League Baseball executive vice president, was the manager of Team USA in the World Baseball Classic last month. The commitment that players of Team USA had as well as the enthusiasm shown by fans convinced him that there is definitely a place for baseball on the international stage and no stage is bigger for sports than the Olympics.

Not admitted as an official Olympic sport until 1992, baseball was eliminated from the Olympics just twenty years later. The reasons cited were lack of international support and poor compliance with the WADA (World Anti-Doping Agency). IOC head Jacques Rogge said at the time that having the very best players in the game was also an important consideration.

The majority of the article talks about the World Baseball Classic and why it is played when it is. Joe Torre said it would be too much of a burden on players and teams to have the WBC played in the middle of the summer, after players have already put in 200+ spring training and regular season games. There is a rhythm to the game, according to Torre, and breaking up the season like they do in hockey would really be disruptive to Major League Baseball. Add to that the risk that players run of getting injured - especially right before teams are set to make their major playoff pushes - and you can see why summer international baseball is an impracticality.

I can only wonder how any case can be made for baseball returning to the Olympics. Although I think that MLB has done a much better job of addressing the IOC's anti-doping concerns, they have done nothing to address the major problem, which is the time of the year when games are played. All depending on where the host country is located, the summer games are played sometime between the middle of July and the beginning of October. If March is the only time that World Baseball Classic events can be scheduled, how in the world is MLB going to feel about their players being yanked mid season, or worse, right as the playoffs are set to begin?

Although I am all for using amateur players - something I wish would happen in all Olympic sports, incidentally - that would not address the concerns the IOC has for having the "very best" players in the game for all of the Olympic sports. Besides, even if using amateur players was acceptable to the IOC, the Baseball College World Series is played from mid to late June. Is two weeks really enough time to put together a team of the very best amateurs and get them to gel?

I sure would like to see baseball and softball back in the Olympics but honestly don't know how baseball, in particular, will ever be able to overcome the timing issue. It'll be interesting to see what kind of case they make next month when they meet with the IOC board in St. Petersburg, Russia.

Pitching Machine Stop Quote of the Day:"You show up at the Olympics, and you're no longer you; you're an American Olympian. You're part of this greater whole, and the individual doesn't matter. " - Shaun White